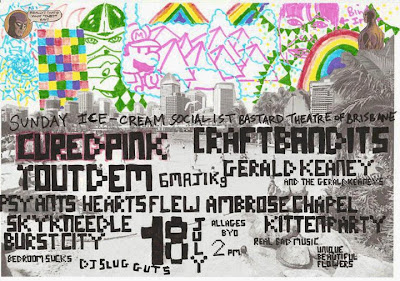 A mini-festival presented by Bedroom Suck Records, described as "A FESTIVAL OF THE BRISBANE UNDERGROUND, ALL AFTERNOON BEERS + BBQ IN THE TROPICAL WINTER SUNSHINE." There was no BBQ but there were plenty of beers, all the bands delivered and it was a really nice day. Aww.

Ambrose Chapel is the solo work of Ian Rogers, well known for his work in No Anchor, AXXONN and back in the day, Iron On. He kicked off the afternoon with some ambient noise in the Burst City courtyard.

Psychadelic collaborative improv noise trippers 6MAJIK9 make a rare journey out of the NSW highlands to perform. They played a long set that had grand moments of lysergic bliss.

Sky Needle are on their own indescribable level of unique awesomeness. Check this out.

One of my favourite things filmed for this blog was Gerald Keaney and the Gerald Keaneys playing at a house show last year in West End. It feels weird that almost a year has past since he's performed in band mode in Brisbane but this set was totally worth the wait. Backed with a new band, Gerald entertains the crowd with his ideas on the future, philosophy, binary code and music videos.

After playing a bunch of well received Melbourne shows, Cured Pink plays his first Brisbane show back to launch a new cassette EP (out on Sabbatical). The set was awesomely short, brutal and ended the event in blood oceans of doommmmm. doooooooooommmmmmmmmmmm. Doom.


I wasn't able to film all the bands that played (Heart Flew, Teen Sex, Yout Dem) but audio bootlegs of each set can be downloaded from Labyrinth City. More thoughtfully written reviews of the performances are there too.
Posted by Matt Kennedy at 2:56 PM 1 comment: 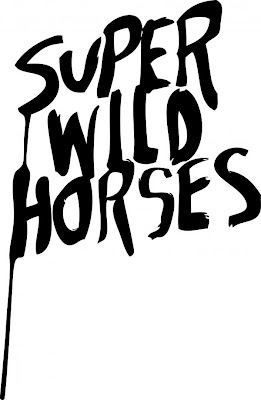 Melbourne duo Super Wild Horses grace Brisbane with their presence to launch debut album 'Fifteen'. The Hangar is always a pretty fun place to watch bands and this show was definitely one of my faves.


I wasn't able to film any of the other bands but Loomer and Southern Comfort played awesomely. You can download high quality recordings of all the sets at Turnitupto10.
Posted by Matt Kennedy at 11:54 AM 1 comment: 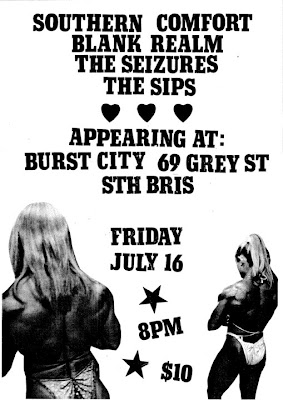 A new song from The Seizures. These guys go all out and it's freaken cool. 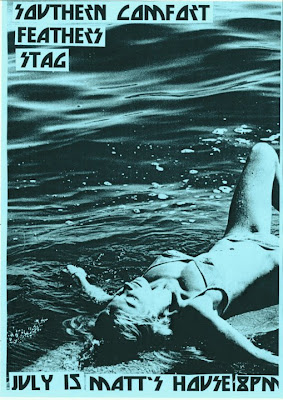 Another show at my house and uh, hell yeah. Good bands, minimal property damage, no noise complaints and my local bottle shop gets rich. Success.

New song from Feathers, 'Darklands' and it's awesome. What a chorus!

Playing their first Brisbane show, Sydney's Southern Comfort (Angie and Harriet from Circle Pit) pack out the lounge room and play through a set of solid hits.
Posted by Matt Kennedy at 6:18 PM No comments: 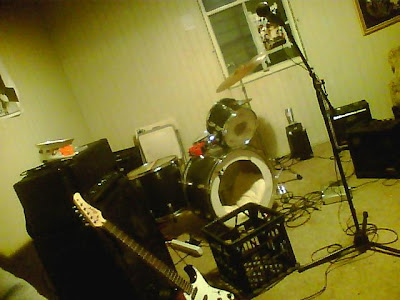 What do you do when there's nothing happening on a weekend in your town? Rent out some DVD's and call it a quiet one? No damnit, you put on a show in your freaken house. ARGH.

Formerly SCIENCE, the renamed PSY ANTS own tonight with a brutally doomed set of Brisbane proportions. One of my favourite live acts of this city.

Extra Foxx brings the night to a laid back end with a lot of songs about winter. I guess it was cold.
Posted by Matt Kennedy at 8:36 PM No comments:

It's Monday and shit, another week. Thee Oh Sees are one of my favourite bands and their Brisbane show in December last year was THE BESTEST. Man I am getting dumb. Anyway this is another song from that show, 'Ghost in the Trees' off the album 'The Master's Bedroom is worth spending a night in'.

Posted by Matt Kennedy at 6:22 PM No comments: