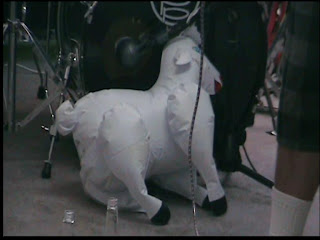 
Brews Brothers is a small time Brisbane brewery situated in the almighty inner city suburb of Woolloongabba, a good place to go to drink some cheap yet quality brew while watching some cheap yet quality bands. It's been a little over a month since Meat Thump played their first show to massive indifference and since then they've expanded into a 4-piece, giving some kid the time of his 15 year old life. Meat Thump's musical references range from the tragically underrated Jim Shepard through to GG Allin and the Rolling Stones, played with as much skill as a bunch of fuck ups from the outer burbs of Brisbane can muster. Damn pure funny awesome shit.
Posted by Matt Kennedy at 4:44 PM 2 comments:

This is a promo video I've made for Blank Realm's epic good vibes song 'Full Moon Door'. Made on a $7 budget (1 x bottle of wine), it features footage from shows filmed over the last year in Brisbane, Newcastle and Sydney. The LP the track is on, 'Deja What?' is getting released in November on Bedroom Suck Records. A worthy addition to anybody's record collection.
Posted by Matt Kennedy at 4:27 PM No comments: 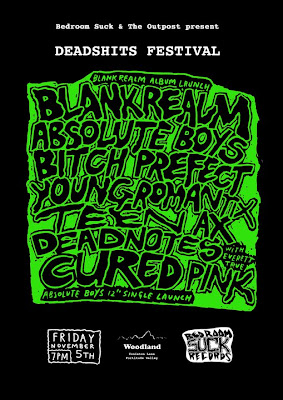 Deadshits Festival is a new festival series I'm helping put together with Bedroom Suck Records and The Outpost. I don't normally use this blog to plug my shit but hell, I want this to do well. We're getting some of the best damn interstate bands of today to come play Brisbane and depending on how the first Deadshits goes (and the second one which is happening in January - TBA), this could be a long running awesome thing. If you're in Brisbane on November 5th and you're a fan of this stuff, come and support it.

Tickets are only $10 and available online through OZTIX and also at The Outpost, Rockinghorse Records etc.

Blank Realm are launching a brand new LP 'Deja What?' at the show, it's an awesome record. Mastered by Mikey Young and features hit after hit after bloody hit.

This video is from the first Absolute Boys Brisbane show in June. I don't dance but they made me come close and considering how dead I am inside, that is an epic feat.

Adelaide's Bitch Prefect are one of the best pop bands in the country right now, effortlessly summing up life as a twenty-something broke sharehouse idiot (speaking for myself here). They've got the hits (Bad Decisions, Marilyn Monroe) but these two music videos are some of their lesser heard gems.

YOUNG ROMANTIX is Melbourne icon Shaun South (frontman of CHROME DOME). Shaun also ran the Summer Winds Festivals, which happened every year in Sydney and Melbourne from 2006 through to 2010 and were an inspiration for Deadshits. Young Romantix last played Brisbane in 2007, it was at Ric's and they played for about 3 minutes before being physically removed from the stage by security, thrown out and banned for life. It still holds up as one of the best performances I have ever seen. 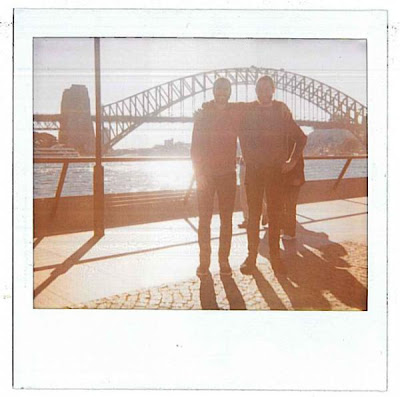 I don't know too much about Teen Ax except that they're 2 guys from Sydney and they play brutal noise. The track on their myspace is pretty awesome.

The Deadnotes have been playing together for almost a decade, combining pop simplicity with improvisational approaches to their live performances ETC. ETC. man I hate trying to define bands with words, it's freaking lame. Deadnotes aren't lame though, they're awesome and with Everett True aka The Legend! once again joining them, it's gonna be cool.

CURED PINK IS A ONE MAN NOISE MACHINE MIXING PRIMORDIAL URGES WITH THE BENEFITS OF ELECTRICITY AND AMPLIFICATION, MAKING AN ATTEMPT TO TRANSCEND THE CONFINES OF SOCIAL RESTRICTION AND RETURN US BACK TO THE NATURALLY UNINHIBITED STATE OF EARLY MAN. CAPS LOCK.

Seeya there.
Posted by Matt Kennedy at 2:35 PM 1 comment: 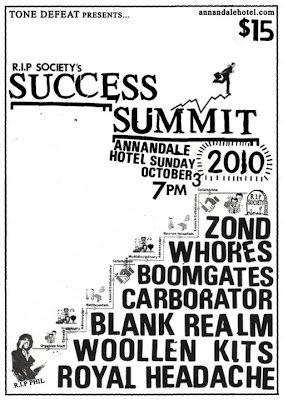 Over the last year R.I.P Society Records has achieved a lot for all of the bands and people involved. The Sydney label has maintained a strong sense of quality in everything it releases, from Circle Pit to Lakes to Zond, it all rules. This show celebrated a damn good year for R.I.P, it was a great day and one of my fav shows of the year.

Whores are criminally underrated as they are one of the best punk rock bands in the country. Pass the goon, mate.

This is Blank Realm performing at their very best. The whole set was amazing to witness but this new song "Full Moon Door" is unreal. One of the best songs I've heard this year (The song is off 'Deja What?' which was released as a CDR by Albert's Basement earlier this year but has since been remastered by Mikey Young and will be re-released on vinyl in November through Bedroom Suck).

Melbourne's Woollen Kits are a band I've wanted on this blog for awhile now and here they are - great pop tunes and friendly dudes.

Royal Headache are one of those rare bands where everyone agrees on how great they are. I've never met someone who doesn't like this band. This was their last show for the year as they take a break from performing to focus on finishing their debut album which will be released early next year. Definitely something to look forward to. 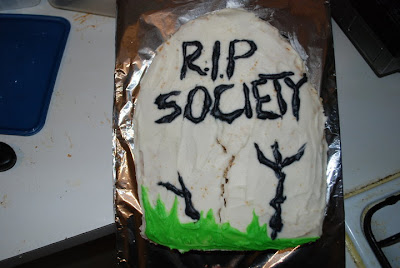 The second photo of a cake I've put on this blog in the last month. Hopefully not the last.

"HEY WAIT MAN WHERE'S ZOND?? THEY WERE FUCKING AWESOME, WHY DIDN'T YOU PUT THEM ON YOUR BLOG????" I lost the disc with the seminal Zond footage I shot somewhere on the drive back to Brisbane and I'm as destroyed as you. Pass the goon, mate.
Posted by Matt Kennedy at 7:53 PM 2 comments: 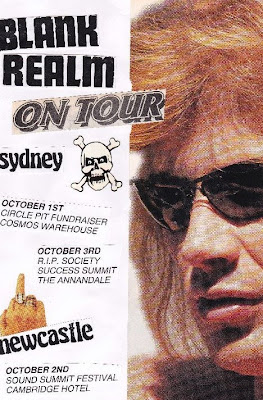 This show was part of the annual This Is Not Art / Sound Summit festival. I've never seen so many people at a show in Newcastle - the place was packed. Memories of this night for me are pretty much a blur, a lack of self restraint wiped me out early on and that's why video cameras rule.

One of the last shows Songs are playing with their current lineup. The first video is 'Something to Believe in' from their self-titled 2009 album and the second video is a brand new song. This footage was filmed by Kieran Lavering.

I was last in Newcastle in April and I played at Rob from Bare Grillz' house and it was the first time they had ever played in front of people I think, they were really sloppy and cool and hurt my ears but what was even better than that was returning to Newcastle 6 months later and watching them play a brutally confident set to a huge crowd of people going nuts over them. I love that shit.
Posted by Matt Kennedy at 12:17 AM No comments: 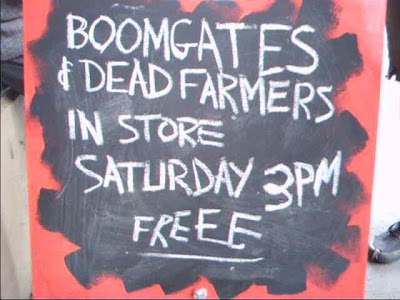 A sweet afternoon instore show at Repressed Records in Newtown for the release of the new Boomgates 7" (out on RIP Society). I would have loved to stay and video Dead Farmers as well but we had to leave straight after Boomgates and drive up to Newcastle (footage from there up next).


Melbourne's Boomgates - Wow. With a lineup consisting of Brendan from Eddy Current Suppression Ring, Steph from Dick Diver and a rhythm section of members from Teen Archer and The Twerps, you know right away this band will be great. Their music is rich with good time summer vibes, listening to it makes me wanna get out of the house more during the daytime and generally be less of a shitty person. A band that can inspire that kinda positivity without coming across as lame is definitely awesome.
Posted by Matt Kennedy at 1:49 PM No comments: 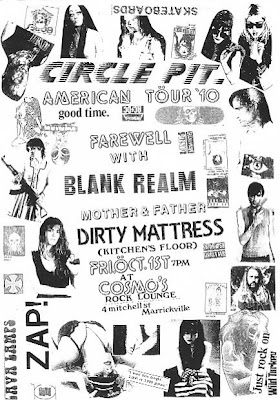 Tonight was Circle Pit's last Australian show for the year, a fundraiser for an upcoming tour of the USA in support of their excellent 'Bruise Constellation' album. I had spent the whole day in a van driving down from Brisbane, arrived late and wasn't in the right frame of mind to decently film the other bands but this show was really all about Circle Pit anyway and I wish them the best.